For in thine hands is a merrily harp, play O bard, a merrily song,
So clapping we may sing an ode, and rejoicing till our heads decline!
Come, so we may make rose petals scatter, so in cups we may cast wine,
So through firmaments we may pierce, and spawn a new design!
Hafez-e Shiraz (poem: 374) 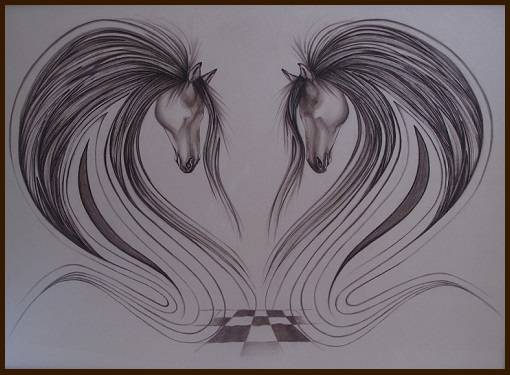 Persian Chess spawns a new design. It certainly won’t pierce through the firmaments, but simply evolves the chess game to something fresh and joyful to play, “for in thine hands is a merrily harp”, to play and explore the myths and maths of the Saturang spectrum; while pieces are rejoicing till their heads decline!

What is Persian Chess?
This chess variant is the result of a long time research, design and development work, which is going on and off since 2006. The current engine (click here to play) is running on JavaScript and therefore suitable to publish on client-side processing webpages and mobile apps using Apache Cordova platform. All this work, the engine and the Android app is Free and Open Source.

I made the first playable program for a 9×9 (or “perfect”) citadel board in June 2006, compiled as a console application without GUI and it was full of bugs and errors which I couldn’t fix back then, so I didn’t publish much information about it except for some queries to several chess experts and ask for their suggestions.

In the last 9 years, I’ve spent time to define and redefine the game rules and learn to program a chess AI. The years of 2009 and 2013 were the most productive ones. In September 2013 the game rules and the first playable engine and UI were released and the work was previously published as Chess911 (www.chess911.com) but after a year of listening to suggestions and critics, soon it became obvious that “chess911” is not an appropriate name for this game at all, therefore in 2014 and 2015, the game is not only further developed, but also renamed to Persian Chess, which is a much more meaningful name for this variant.

Persian Chess sub-variant are named similar to the development code-names of Ubuntu Project: the names are 2 words beginning with the same letter: Celtic Citadel, Persian Princess, Egyptian Eye and Oriental Omega. However, Ubuntu devops are showing much more bravery by choosing names like “Perverse Penguin”, “Quirky Quagga”, “Sensual Sasquatch”, “Telepathic Turkey” and “Zig-zagged Zanzibar”! Luckily we’re not that far yet.

By researching the best way to program a portable engine for this game, which ended me up to JavaScript, Ruby and recently C# for win app, I get busy programming and debugging the engine in my free time. In these years, designing, creating sub-variants, testing, calculating, debugging and coding Persian Chess has took me about 700 hours of work. Programming the current JavaScript portable engine (based on the Open Source codes mentioned in the About page) took me 3 weeks, initially.

This game is not a member of the “Mad Queen” (MQ) family. Mad Queen is a class of chess game where the queen is the superpower and the single compound piece on board: she is suddenly moving like rook AND bishop where no other compound pieces are present on board. This class includes the standard 8×8 FIDE chess or what we actually know as “Chess” today.
But historically, chess has always been more than that… it has been played in many variants and start positions, depending on the occasion, and the game rules were some kind of “gentlemen agreement” between 2 player and were not written like ten commandments on stone, other compound pieces were also natural to the chess game, although they are being called “fairy pieces” nowadays. In Persian Chess, 2 other natural compound pieces (Princess and Fortress) are not “fairy” at all; They are an integrated part of the logical development in this game, like queen and other pieces are.
If you strongly believe that “Chess”, or to be more specific, “Mad Queen 8×8 variant” is the only Chess game that human beings are allowed to play, then go play it again and again…, but not here: because in Persian Chess no queen is mad. Instead, in this game you are dealing with more magical realms: Persian Princess, Celtic Citadel, Egyptian Eye and Oriental Omega: the sub-variants of Persian Chess.
If you are interested in positional play and calculating long lines and variation, you might find Persian Chess one of the most fun chess variants to play.

Apart from the design philosophy, I really hope you’ll still find Persian Chess an interesting game, even if you are a chess purist and perfectionist, and enjoy playing it as much as I’ve had fun, in the past 9 years by designing and programming it.

The reason to design, program and/or to play a chess variants (in general) is to have a new good look at chess, avoid memorizing moves, and improve one’s ability to calculate more effectively on the standard 8×8 chess board. The main technical purpose of this board design is to create a game, one step closer to the mathematical perfection of chess. In chess variants encyclopedia, a 9×9 board is called “perfect” board since the start position is (or can be) perfectly symmetrical and there is no “king-side” or “queen-side” if the king is positioned in the middle file. There is only “left-side” and “right-side” for the king which are in Persian Chess are called “Queen side” and “Princess side”. Queen side means left-side for the white king and right-side for the black king, and Princess side is vice versa.

If you play some games, you’ll see that in Persian Chess, the opening lines are longer, simply because of one rank longer distance between pawns, and the game takes longer lines of moves in any stage of the game; the opening, the middle game and the end game.
In some position you would need to do a huge amount of calculation to be able to handle the unexpected attacks by Princess and Fortress.

All the utterly unexpected, aggressive attacks by Princess and Fortress, surprising and complex chess positions and symmetrical opening lines in Persian Chess and all it’s sub-variants, will probably help you to gain greater knowledge and ability on the standard MQ 8×8 FIDE chess board. It has been said that Chess is an sport. If it is so, then it can be a brutal and breathtaking sport too. Lifting heavier weights helps sportsmen and women to lift lighter weights easier and face their challenges with a higher degrees of self confidence. That is called “training” and I hope it works for you too.

Have a good game!